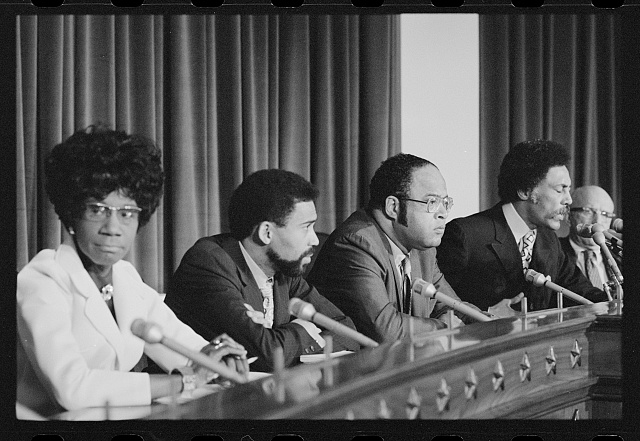 This week, thousands of people from around the country will gather in the vast Washington, D.C., Convention Center to take part in a decades’ old tradition: the annual legislative conference of the Congressional Black Caucus (CBC) Foundation. From September 20 to 24, participants will hear from approximately 100 hundred speakers, including many members of Congress, who will challenge them to think creatively about public policy issues facing African-Americans and the global black community.

We know much about the CBC’s history, its impact on national politics and the triumphs and setbacks of its leaders thanks in part to a book researched and written at the Library of Congress by Rep. Major R. Owens (D-N.Y.). When he retired from Congress in 2007, he accepted an invitation from the Librarian of Congress to serve as a distinguished visiting scholar at the Library’s John W. Kluge Center. While he was here, he drafted “The Peacock Elite: A Case Study of the Congressional Black Caucus.” 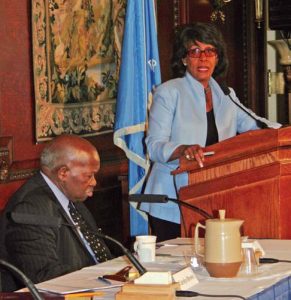 Major Owens, seated, with Rep. Maxine Waters at a 2007 Kluge Center event focusing on Owens’ history of the CBC. Photo by George Clarkson.

Owens’ residency at the Library was perhaps a fitting conclusion to his career: he began his working life as a professional librarian at the Brooklyn Public Library in 1958. During his time there, he became active in politics and the civil rights movement. In 1974, he was elected to the New York state senate; in 1982, he won the seat in New York’s 11th congressional district vacated by founding CBC member Shirley Chisholm upon her retirement. Owens served in the House of Representatives for 24 years and was an active member of the CBC.

The CBC came together as a formal organization in 1971 in the 92nd Congress to serve as a voice for the African-American community and, as expressed in its original mission statement, to “promote the public welfare through legislation designed to meet the needs of millions of neglected citizens.”

In domestic policy, the CBC has supported efforts to improve educational quality and access to education and health care, reduce unemployment, protect voting rights and ensure better housing and child care for poor and working-class citizens. In foreign policy, the CBC has highlighted international human rights and issues on which it believes U.S. policy may conflict with American values of liberty and equality.

Today, in the 115th Congress, the CBC has 49 members in the House of Representatives and the Senate, including Rep. John Conyers (D-Mich.), a founding CBC member who is serving his 26th consecutive term in the House.

The title of Major Owens’ book, “The Peacock Elite,” refers to elected officials, Shirley Chisholm among them, who have been skilled at using public display to achieve goals. His book analyzes the success of these individuals in helping to improve the lives of African-Americans as well as quieter behind-the-scenes efforts.

In October 2007, as a Kluge Center visiting scholar, Owens hosted a panel of U.S. representatives and political scientists to discuss the subject matter of his book. The panel included Rep. Maxine Waters (D- Calif.), a current CBC member; two founding CBC members, Ronald Dellums and Louis Stokes; and political scientists Ronald Walters, then at the University of Maryland, and Michael Eric Dyson of Georgetown University. Listen to the presentation here.