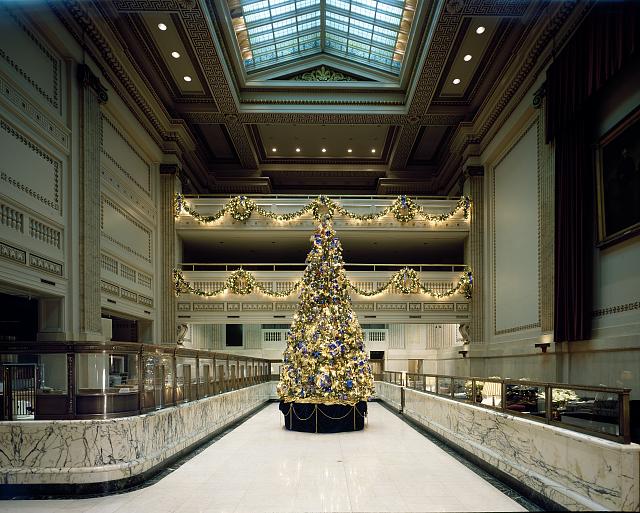 A Christmas tree sits at the center of a Washington, D.C., bank, built in the early 20th century. Photo by Carol M. Highsmith.

Thomas Edison, inventor of the first successful practical light bulb, created the very first strand of electric lights. During Christmas 1880, strands of lights were strung outside his Menlo Park, New Jersey, laboratory, giving railroad passengers traveling by their first look at an electrical light display. But it would take almost 40 years for electric Christmas lights to become a tradition. 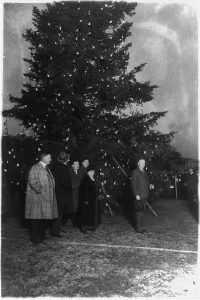 On Christmas Eve 1923, President Calvin Coolidge presided over the lighting of the National Christmas Tree with 3,000 electric lights.

Before electric Christmas lights, families used candles to light their Christmas trees. This practice was dangerous, and led to many home fires. In 1882, Edward H. Johnson, Edison’s friend and partner, put together the very first string of electric lights meant for a Christmas tree. He hand-wired 80 red, white and blue light bulbs and wound them around his Christmas tree. Not only was the tree illuminated with electricity, but it also revolved.

But the wider world was not yet ready for electrical illumination—many people continued to greatly mistrust electricity. Some credit President Grover Cleveland with spurring the acceptance of indoor electric Christmas lights when in 1895 he asked for the White House family Christmas tree to be illuminated by hundreds of multicolored electric light bulbs. 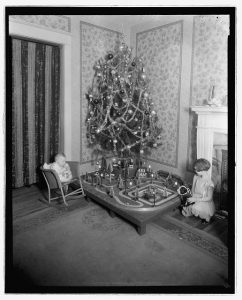 Two small children around a lighted Christmas tree sitting above a village complete with a train.

At the time, the wiring of electric lights was very expensive, requiring the services of a wireman, the equivalent of our modern-day electrician. Some have estimated that lighting an average Christmas tree with electric lights before the turn of the century cost $2,000 in today’s dollars. In 1903, General Electric began to offer preassembled kits of stringed Christmas lights, making their use more affordable.

Thomas Edison and Edward H. Johnson may have been the first to create electric strands of lights. But it was Albert Sadacca, whose family owned a novelty lighting company, who saw a future in selling them. In 1917, when he was still a teenager, Albert suggested that the company sell brightly colored strands of Christmas lights to the public. Later, Albert and his brothers organized what became the National Outfit Manufacturers Association Electric Company. It cornered the Christmas light market until the 1960s.

This post draws on the science reference site, “Everyday Mysteries: Fun Facts from the Library of Congress.”