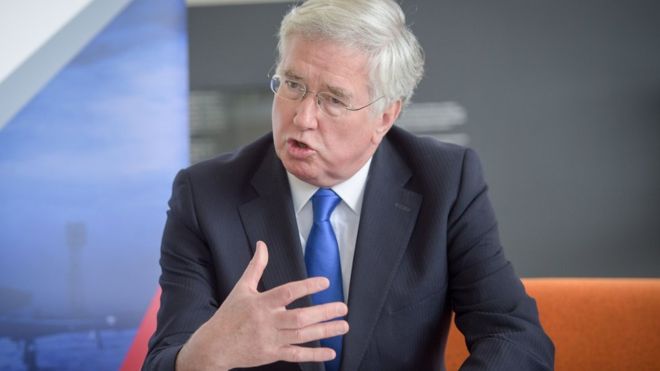 The UK could carry out military strikes in response to cyber attacks, the UK defence secretary has said.

Sir Michael Fallon told the Chatham House think tank the UK had the ability to respond to hackers “from any domain – air, land, sea or cyber”.

Sir Michael also emphasised the UK’s ability to carry out “offensive” cyber attacks of its own.

His comments came after hackers mounted a “determined attack” on the UK Parliament last Friday.

Up to 90 email accounts were compromised, although government sources said the attack was later contained.

Companies across the globe, including one of Britain’s biggest companies, advertising agency WPP, are reporting that they have been struck by a major ransomware cyber-attack.

And in May, NHS services across England and Scotland were hit by a large-scale cyber-attack that has disrupted hospital and GP appointments.

Commenting on the cyber attack on Parliament, Mr Fallon said: “Last Friday we saw the UK hit by yet another cyber attack, this time directed against our parliamentary IT systems.