Every country has found itself face to face with this situation at the close of a great war. From Rome under Caesar to France under Napoleon down even to our own Civil War, the problems arose as to what could be done with the soldiers to be mustered out of military service.

What to do with returning soldiers—how to reintegrate them into peacetime society—was a central challenge for the U.S. government after World War I.

Of course, it was not the first time the U.S. had waded into the waters of international conflict: the American Revolution, the War of 1812, the Mexican-American War and the Spanish-American War were all precedents. Yet the Great War represented the first time the nation fully harnessed its industrial might and political capital while also drafting a military to fight overseas. During the Civil War, roughly 8 percent of the military was conscripted, compared with 72 percent during World War I.

Ultimately, the First World War helped spur activism on behalf of and by veterans while also laying the groundwork for a 20th-century disability-rights movement. It is possible to trace the formation of a vibrant veterans’ movement by exploring the Library’s exhibit “Echoes of the Great War: American Experiences of World War I,” holdings in the Prints and Photographs Division and the papers of Woodrow Wilson in the Manuscript Division.

Civilian gratitude for the sacrifices of the American Expeditionary Force shared space with fear regarding the kind of values and infirmities veterans might carry home from abroad. They returned to an economy lumbering toward recession, a militant labor force willing to strike for better pay and benefits and a public anxious about political radicalism, race and immigration.

In some cases, government actions helped to darken the national mood. Attorney General A. Mitchell Palmer ginned up antipathy toward immigrants and unions, for example, by painting each with the brush of political radicalism, jailing thousands and deporting hundreds, including the anarchist political activist Emma Goldman. Organized labor saw the brief gains it made during the war evaporate; immigrants witnessed Congress pass restrictions on immigration that would remain for decades.

Upon discharge, veterans received $60, just enough to purchase new clothes. Even with the freshest of threads, returning WWI veterans encountered great obstacles in such an environment. By April 1919, an estimated 40 percent or so of veterans remained unemployed.

None of this is to say the government ignored veterans entirely. As the U.S. entered the war in 1917, Congress passed the Smith-Hughes Act to promote vocational training in agriculture, industrial trades and home economics. The following year, the government created the United States Employment Service to place workers in jobs created by mobilization and aid returning veterans in finding work. 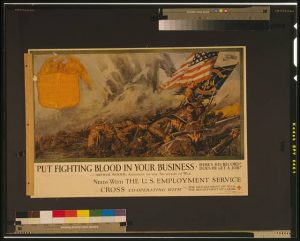 Ultimately, the service referred 6 million workers for roughly 10 million job openings, but proved less helpful to veterans once funding diminished after the war. The Smith-Hughes Act also struggled to live up to its promises: Veterans complained of distant and unhelpful vocational counselors, among other problems.

For black veterans especially, the transition proved harrowing. Emboldened by military service and seeking to lay claim to the rights of citizenship, many black veterans endured harassment by white racists and even death; lynching doubled in the years between 1917 and 1919. During summer 1919, cities across the country, including Washington D.C., experienced horrible race riots that resulted in millions of dollars in property damage and over 100 deaths. Governments, state and federal, did little to assuage the inequality and indignities suffered by returning black soldiers.

Realizing that veterans needed a political voice, a cadre of military officers established the American Legion in 1919. It was one of nearly 175 organizations established in the wake of the war to represent veterans, but it quickly became the most politically powerful veterans lobby in the nation. Within its first year it drew 843,000 members; by 1931, it claimed over a million.

The organization’s advocacy for veterans, particularly its efforts to draw attention to their sacrifices, raised public awareness regarding military service and its effects. “The first duty of the American Legion,” national commander Hanford MacNider argued, “is to see that those men who came back from their service, blinded, maimed, broken in health and spirit, who must live the war forever in their homes through the country, get a square deal from the Government they fought for.”

Critics took the organization to task for its hypernationalism and militant anticommunism, which sometimes targeted immigrants and union activists and contributed to civil liberties violations. The legion also reasserted racial hierarchies—local branches were allowed to exclude African-American veterans—and failed to truly advocate for black soldiers.

Still, the American Legion’s full-throated advocacy and political influence helped to persuade the government in 1921 to establish the United States Veterans Bureau, a precursor to today’s U.S. Department of Veterans Affairs. Though the bureau struggled with accusations of waste, graft and corruption, this imperfect beginning did establish veterans as a legitimate political voice in American politics and set the tone for future efforts to reintegrate returning soldiers into the body politic.