This is a guest post by Megan Harris, a librarian with the Veterans History Project. It is one of four profiles that make up “Veterans on the Homefront,” published in the November–December 2017 issue of LCM, the Library of Congress Magazine. This profile recounts the way in which Tracy Sugarman was affected by his time in uniform.

A detail from a Sugarman watercolor showing sailors aboard a ship in Normandy in September 1944. 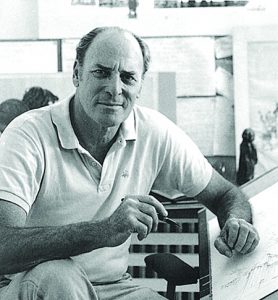 Tracy Sugarman at his desk.

As a young Navy officer arriving in Normandy on D-Day, Tracy Sugarman brought with him a few secret weapons: a sketchpad, pen and watercolor paints. Throughout his service overseas, Sugarman—a trained artist and aspiring illustrator—had been busy documenting what he saw in the form of quick but evocative sketches, which he then sent home to his new bride, June. By the time he reached France, drawing became not only a form of communication with his wife, but also a way to cope with the horrors of war.

Art, he said in his 2003 Veterans History Project oral history interview, was “a way to come to terms with getting through a bad time. If I could put it on paper, I could deal with it.”

After the war, art became his livelihood as well as a means of activism. While he created commercial works for publications such as Ladies’ Home Journal and the Saturday Evening Post, he also served as a reportorial artist on the front lines of another war: the civil rights movement.

During the summer of 1964, he joined activists organized by the Student Nonviolent Coordinating Committee to register African-Americans to vote in rural Mississippi. His time in the South yielded 100 drawings depicting “what was really happening” in the South, later used in news reports around the country.

Though he had once dreamed of becoming the next Norman Rockwell, art came to occupy a much more transcendent role in Sugarman’s life: As he explained in a 2009 lecture at the Library of Congress, “I first learned in Normandy that my art could be much more than a way to make a living. It could guide me to the truth, if I trusted it.” 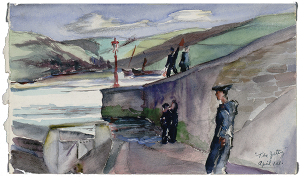 Pedestrians near a jetty in the harbor at Fowey, England, in April 1944.

Sugarman’s Veterans History Project collection includes his oral history interview and more than 250 letters to his wife. Lyrical and passionate, the letters illustrate his experiences in war as well as the pain of being separated from June.

In 2000, he published “My War: A Love Story in Letters and Drawings,” with selections from his original wartime drawings, which reside in the Library of Congress Prints and Photographs Division. In 2012, he published “Stranger at the Gates: A Summer in Mississippi,” which tells the story of his experiences during the summer of 1964.