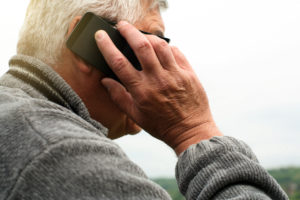 Chances are, you’ve heard about the so-called Can You Hear Me? scam.

For months, officials from local police to the Federal Communications Commission (FCC) have warned, via generous media coverage, about phone calls designed to get you to say yes, reportedly so scammers can make unauthorized charges to your credit card.

This ongoing ploy gets its name from this usual scenario: Your phone rings, usually displaying a local phone number on caller ID to increase the odds you’ll answer. After a brief silence, a cheery woman’s voice says, “Hi there!” and adds with a laugh, “I was having a little trouble with my headset! Can you hear me?” Other versions begin asking “Are you the homeowner?” or “Is this the lady of the house?” — each designed to elicit that affirming answer.

“The caller then records the consumer’s ‘Yes’ response and thus obtains a voice signature,” warns the FCC. “This signature can later be used by the scammers to pretend to be the consumer and authorize fraudulent charges via telephone.”

Should you be concerned? Maybe, but not necessarily because of the much-ballyhooed reason. Here’s why:

Sure, it’s possible that saying yes on a phone call can be recorded and used by unscrupulous vendors as “proof” of a purchase agreement, leading to unauthorized charges in the illegal practice known as cramming. It’s another reason to carefully review utility bills and credit card and bank statements, looking for often small but ongoing charges for unrecognized services.

The bigger concern, perhaps, is Can You Hear Me? calls may indicate the future of robocall scams that use sophisticated, less robotic-sounding, automated “chatbots” for more convincing cons — or, at least, to solicit a response to verify a working number ripe for future calls. This developing technology is designed to sound so natural that you don’t know it’s a robocall until it’s too late, experts tell the Los Angeles Times.

Your defense: If you answer calls from unrecognized numbers (even local), don’t be fooled by saying yes — or anything else. If there’s silence after your “Hello” greeting, hang up; you’re being transferred to a call center. Don’t follow instructions to opt out of future calls, as this is another trick to identity working numbers for future scam campaigns.

Better yet, don’t even answer.