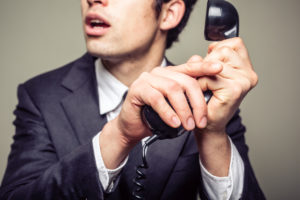 “Call from 877-382-4357? Hang Up,” warns the Federal Trade Commission. Seems that phone number – better known as 877-FTC-HELP, the agency’s go-to hotline to report scams – is another example in a never-ending plague of spoofing, the practice of deliberately displaying a false number (and sometimes name) on the recipient’s caller ID.

The goal of scammers using this tried-and-true telephone trickery is to present a phone number that can be trusted, so recipients answer the phone. “Once you start talking,” explains Jonathan Sasse of PrivacyStar, whose app identities and blocks scam calls, “their autodialing software detects a live number and person on the other end and the scam begins.”

How spoofing works: Using cheap and readily available services such as Spoofcard and/or popular computer-based Voice over Internet Protocol (VoIP) telephone systems, phoning fraudsters select whatever number they want displayed, for whatever ruse they choose. They most often pretend to be calling from a government agency, utility company, bank or tech company such as Microsoft. They also claim to be police, sweepstakes officials, even AARP. Fast-growing schemes include spoofing local numbers (typically using the recipient’s same area code and prefix) so calls appear to be from neighbors, your pharmacy or doctor’s office – or even your own phone number.

Some spoofed calls are made individually, but the majority are sent en masse – sometimes by the millions – with the help of autodialers. Some are “live,” but most are robocalls – and with as little as your “Hello,” you’re typically transferred to a boiler room where a smooth-talking fraudster take over.

Although spoofing scams have been around for nearly a decade – originally done mostly to glean consumers’ bank account details – it’s now the foundation of most leading phone scams. (Spoofing itself is not illegal, but under federal law, it is illegal to transmit misleading or inaccurate caller ID information “with the intent to defraud, cause harm, or wrongly obtain anything of value.”)

Whatever the ruse, it’s the same rip-off: First, display a phone number that appears trustworthy so the call is answered. Then, those most untrustworthy scoundrels behind this deceptive dialing angle for your money and/or phish for personal information that could be used for identity theft – usually by instilling fear, sometimes luring with greed.

To make calls seems authentic – and better incentivize you to answer – spoofed numbers often display the name of the supposed caller, say “Internal Revenue Service” or “Bank of America.” But others have more generic displays such as “Bank” or “County Courthouse,” maybe a city such as “Washington, D.C.”; others simply show a phone number.

Consider the most common phone schemes, each using spoofing with a fraud-focused cornerstone: False threats of immediate arrest from self-described IRS agents and police because of overdue taxes or missing jury duty. Bogus bank calls alleging “a problem with your account” and Medicare scams claiming a need to “verify your identity” or you’ll lose benefits. The myth that your computer has a crippling virus when those liars from a far-away country have no idea if you even own one. The list goes on – and so will spoofing.

Depending on your phone type and operating system, call-blocking apps such as Hiya, Truecaller, NoMoRobo or PrivacyStar can block many spoofing calls. But when others get through, here’s what to do in addition to not answering or hanging up: