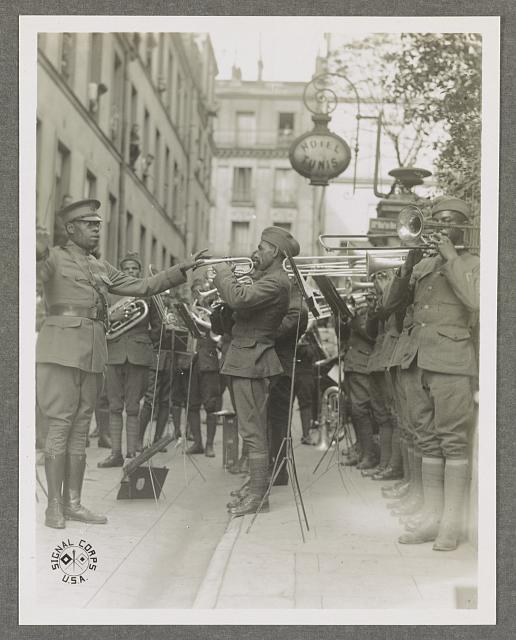 James Reese Europe’s band plays jazz tunes in the courtyard of a Paris hospital that is treating wounded American soldiers.

In the afterglow of the armistice in 1918 that ended World War I, Europe, and particularly the city of Paris, exhibited a wild exuberance. In mid-January 1919, future civil rights pioneer and American Expeditionary Forces (AEF) officer Charles Hamilton Houston encapsulated the mood and sounds of European joy: “Paris is taken away with [jazz] and our style of dancing,” he wrote in his diary. “The girls come after the boys in taxis and beg them to go to the dance. Colored boys are all the go.”

World War I brought many changes to the world, jazz not least among them. Some historians characterize it as America’s greatest cultural gift to the globe. It emerged not only as the favored soundtrack of the war, but also as a burgeoning cultural force for nascent, albeit halting and incomplete, integration.

Europe’s band consisted of African-American jazz musicians such as Noble Sissle, but also over a dozen Puerto Rican players recruited by Europe himself from the Caribbean island. Some of its earliest performances overseas occurred at the health resort Aix-les-Bains. A world-famous destination frequented by the likes of J.P. Morgan, during the war it served as a site for recovering Allied soldiers, replete with hot springs, ancient Roman ruins and French and Italian architecture. Here Europe’s band regaled recovering troops with jazz compositions.

“From the very first afternoon concert, when they opened with ‘Over There’ and the war-weary American soldiers responded by climbing on tables, shouting, waving their caps, and demanding that it be played again and again, the band was a great hit,” writes historian Reid Badger in his biography of Europe. 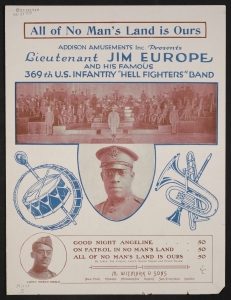 Sheet music for “All of No Man’s Land is Ours,” by James Reese Europe, Noble Sissle and Eubie Blake.

The band made waves with French citizens, too. On its way to Aix-les-Bains, it entertained a local town. The bandmaster’s baton “came down with a swoop that brought forth a soul-rousing crash,” recounted band member Noble Sissle. “[T]hen, it seemed, the whole audience began to sway. . . . The audience could stand it no longer; the ‘jazz germ’ hit them, and it seemed to find the vital spot, loosening all muscles.”

This scene played out across France, pulling in European and American audiences alike. Troop trains “carrying Allied soldiers from everywhere,” passing the 369th, took in the sounds as “every head came out the window when we struck up a good old Dixie tune,” remembered Sissle. Even German prisoners forgot their incarceration, abandoned their labor and began to “pat their feet to the stirring American tune.” Jazz bands like the 369th played at hospitals, rest camps and numerous other venues.

An August 1918 performance at the Théâtre des Champs-Élysées in Paris by the 369th so impressed AEF General Tasker Bliss and his French counterparts that they asked the band to play in the French capital for eight more weeks. Another concert featuring the 369th at the Tuileries Gardens, along with some of the great bands from around Europe, drew 50,000 listeners. “Everywhere we gave a concert it was a riot,” Europe told an interviewer in 1919.

The magic of jazz played in France moved even the American segregationist Irvin S. Cobb. A southern humorist and Saturday Evening Post columnist, Cobb had made a name for himself with the American public in part from his frequent ridicule of black speech and people. He traveled to France with two other journalists to document the service of black troops in the French army—due to the U.S. military’s aversion to integration, and the Allies’ need for troops, Europe and others in the 369th were assigned to the French military. (They were the first African-American troops to encounter German troops in battle.)

Europe’s band knew of Cobb; many members disdained him, yet they understood the importance of a performing for the then-influential writer. “A full moon shone across the shell battered houses of the little town silhouetting the demolished steeples of a church nearby” as the sounds of artillery and machine gun fire echoed in the background, notes the historian Reid Badger of the 1918 performance.

Neither the scene nor the music was lost on Cobb, who wrote in the August 1918 edition of the Saturday Evening Post: “If I live to be 101, I shall never forget the second night which was a night of a splendid, flawless full moon. . . . [W]hen the band got to ‘Way Down Upon the Suwannee River’ I wanted to cry.” The villagers also responded with tears; one “heavily whiskered peasant,” noted Cobb, “threw his arms” around one of the band members, “kissing him.”

Tragically, Europe died not long afterward, following an attack in Boston in 1919 by a disgruntled band member.

Noble Sissle captures Europe and America’s cultural contribution best: “Who would have thought that [the] little U.S.A. would ever give to the world a rhythm and melodies that, in the midst of such universal sorrow, would cause all students of music to yearn to learn how to play it?“