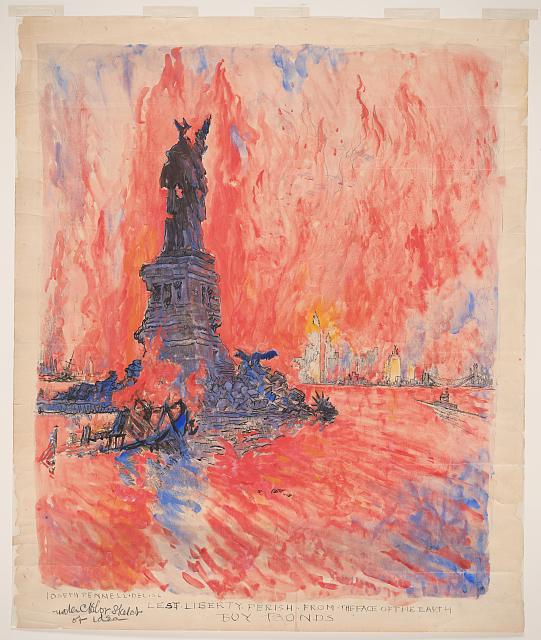 This is a guest post by Kathleen McGuigan, an educational resources specialist in the Educational Outreach Program.

“Lest Liberty Perish,” by printmaker Joseph Pennell, encouraged purchase of bonds to support U.S. efforts in World War I. Pennell’s wartime work will be the subject of a November 28 Library of Congress webinar.

Hundreds of visitors to the Library over the past few months have taken a deep dive into the Library’s World War I resources by attending a gallery talk—a presentation by a Library specialist about the exhibition “Echoes of the Great War: American Experiences of World War I,” commemorating the 100th anniversary of U.S. entry into the war. Now you can participate in a gallery talk long distance through our new five-part webinar series.

We developed the webinar series based on gallery talks to highlight some of our most remarkable World War I resources, including documents, photographs, maps and personal stories collected through the Veterans History Project. A new 40-minute live talk will take place every month from August 22 through the end of the year.

The talks are open to everyone, but registration is required. Once you register, you will receive instructions for joining the session. If you can’t participate in a live talk, you can listen later: the Library will make recordings of all the talks available on its website.

Here is the schedule. All talks begin at 2 p.m. ET.

August 22
Echoes of the Great War: American Experiences of World War I
Cheryl Regan, the exhibition’s director, will guide you through the making of the exhibition and the upheaval of world war as Americans confronted it, both at home and abroad. The exhibition considers the debates and struggles that surrounded U.S. engagement; explores U.S. military and home-front mobilization and industrialized warfare; and touches on the war’s effects as an international peace settlement was negotiated, national borders were redrawn and soldiers returned to reintegrate into American society.

Before Charles Hamilton Houston became the chief attorney for the NAACP and a mentor to Thurgood Marshall, he was a young officer serving in a segregated military during World War I. Here he is shown at reserve officers training camp in Des Moines in 1917. He is in the second row, fifth from the right. Houston will be the subject of a December 12 webinar.

September 26
Over Here, Over There: Immigrant Veterans of World War I
More than 120,000 veterans received citizenship as a direct consequence of military service, beginning a tradition of service-based naturalization. Owen Rogers of the Veterans History Project will explore the intersection of immigration and World War I military service through materials collected by the project.

October 24
Woodrow Wilson Chooses War
Like many individuals around the globe, Woodrow Wilson was shocked by the outbreak of a devastating world war among European empires in 1914. As U.S. president, however, he had a unique opportunity to shape the outcome of this catastrophic conflict. Sahr Conway-Lanz, a historian in the Manuscript Division, will discuss the Woodrow Wilson Papers at the Library. They are the most extensive and significant collection of Wilson documentation found anywhere and include his White House files as well as personal and professional materials from the rest of his life.

November 28
Lest Liberty Perish: Joseph Pennell and World War I
Katherine Blood, curator of fine prints in the Prints and Photographs Division, will discuss the wartime work of printmaker Joseph Pennell, including “Lest Liberty Perish,” an evocative image of New York City destroyed by the enemy. Created for the Fourth Liberty Loan Drive of 1918, Pennell’s design was mass produced. The division preserves impressions of virtually all of Pennell’s graphic works.