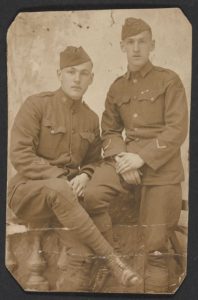 This is a guest post by Naomi Coquillon, an education specialist in the Interpretive Programs Office.

C.F. Stensen (right) with his older brother, Erling, during World War I. The contents of a forgotten footlocker purchased on eBay brought C.F. Stensen’s story back to life.

When I began to develop educational programs for the Library’s new exhibition, Echoes of the Great War: American Experiences of World War I, I knew I wanted to give visitors the opportunity to touch objects from the period, to experience for themselves things a soldier actually carried. I hoped that handling original objects would enhance the experience of seeing the items from our collection on display and would truly make this history come to life for our visitors.

When I saw a World War I-era footlocker and its contents for sale on eBay, I scooped it up. It arrived full of items I had hoped for—a helmet, a haversack—but also of surprises, from a pouch filled with 100-year-old tobacco to the biggest surprise of them all: many of the items were marked with a name, C.F. Stensen.

The eBay dealer I worked with bought the footlocker in an estate sale on Long Island in the early 2000s but could not recall the name of the owner. So I used what I had—a partial name: C.F. Stensen; a location: New York; and a probable birthdate: some time between 1880 and 1900—and took to the internet. By searching military records on Ancestry.com, which is accessible in the Library’s Local History and Genealogy Research Room, I found a military service abstract and National Guard record for a “Christian F. Stensen.” I had a name! 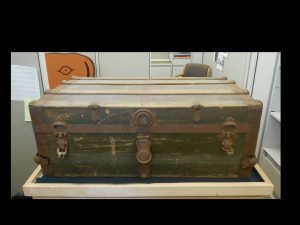 These documents told me more about my mystery soldier. Christian enlisted in the New York National Guard when he was 18 and was a private in the 107th Infantry Division. He served in France and was wounded in September 1918. From there, I examined census records, which told me that he was born in New York City in 1899 to immigrants from Denmark and Norway, and he had an older brother, Erling, and a younger sister, Agnes.

The more I learned, the more I wanted to know. I especially wondered what he looked like. I kept searching and, finally, I found it—a photograph of Stensen as a young man, arms crossed, looking off into the distance. It was posted by an Ancestry member, to whom I sent an email. “I am looking for Christian Stensen,” I wrote. “By any chance are you related to him?”

“Yes,” came the reply from a woman named Gerry. “I am his grandniece.” I could hardly believe it—I had uncovered the mystery of C.F. Stensen. 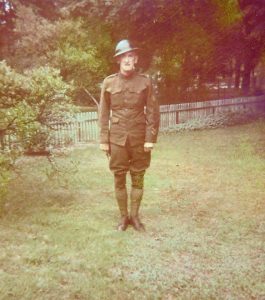 C.F. Stensen as an older man wearing his World War I uniform.

Gerry connected me to Lynn, Christian’s granddaughter. When I sent her a photograph and a description of the footlocker to verify its ownership, she replied:

“OMG . . . that is his locker, and the contents I remember as a child, when on rare occasions he would take me upstairs to the attic, where he stored the locker, inside he would remove his uniform and I could see all the other items. This is my Grandfather, Christian Stensen, [on] one of those days where we had gone through his locker, as he needed the uniform for a special event.” 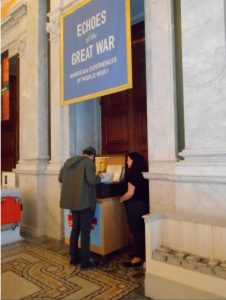 A visitor examines Stensen’s footlocker on a “hands-on” cart, part of the Library’s World War I exhibition.

As Lynn and Gerry explained, Christian and Erling enlisted as soon they were old enough, and they served together in the war. They began a long history of military service in the family. Christian’s son was in the Navy during World War II, and his grandson served in Vietnam. Gerry sent more photographs of the brothers together and of her grandfather alone and with peers.

Lynn and Gerry agreed to donate the photographs and several documents from the footlocker to the Library’s Veterans History Project, which preserves and makes accessible the personal accounts of American war veterans. “Keep the photographs and other items as part of the collection . . . so many people can see and learn and understand,” Lynn said. “You have no idea how proud and honored I am that my Grandfather is connected to this historic event.”

Visitors can examine Christian’s footlocker and its contents at a moveable “hands-on” cart on Wednesdays, Fridays and some Saturdays outside of the Echoes of the Great War exhibition in the Thomas Jefferson Building until the exhibition closes in January 2019. At that time, at Lynn’s request, the Library will donate the footlocker and its three-dimensional items to the American Legion in Islip, New York, of which Christian was a member.