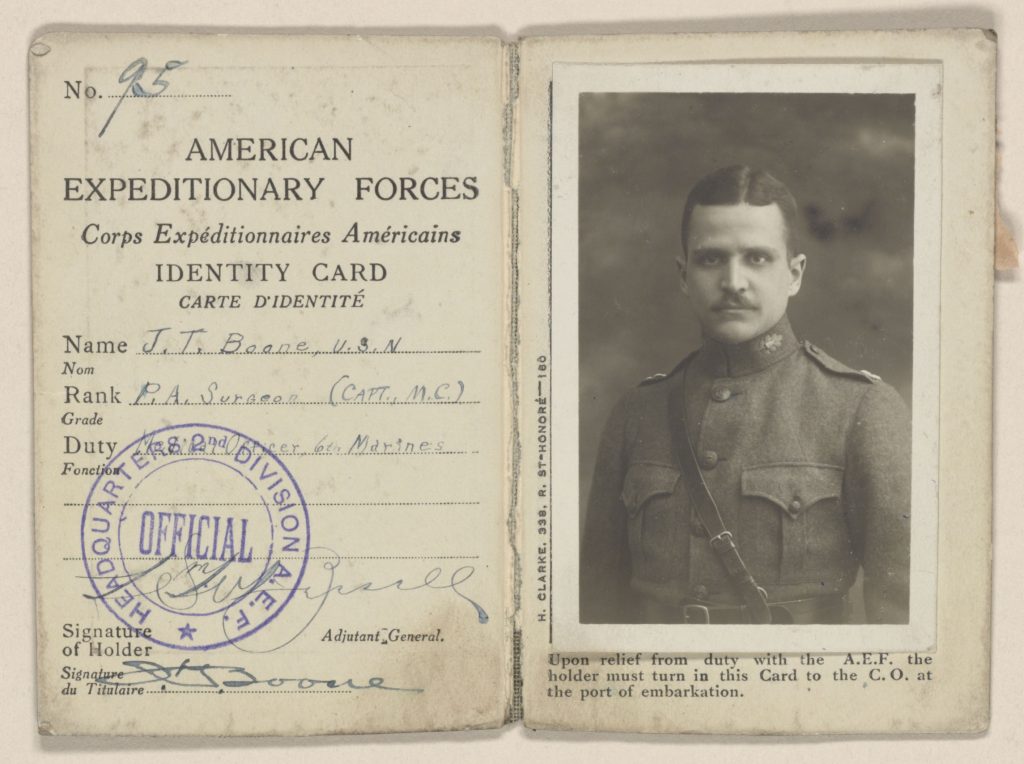 The following is a guest post by Mark Hartsell, editor of the Library of Congress Gazette.

As a surgeon with the U.S. 6th Marines in France, Joel T. Boone saw the cost of World War I up close—comrades mutilated, amputations performed by candlelight, the frightful loss of life.

“My heart has bled by the things I have seen,” wrote Boone, who earned the Medal of Honor for heroism under fire in 1918. “Last night was a perfect inferno. We worked incessantly from 7 until that hour this morning and all day. . . . Officers with both legs gone in the prime of youth is one of the most horrible to see.”

The war was like none before it—a global conflict, waged across continents by dozens of nations, fought with revolutionary weapons, causing tens of millions of casualties.

To mark the centennial of U.S. entry into the war, the Library of Congress on April 4 opened a major new exhibition, “Echoes of the Great War: American Experiences of World War I.” “Echoes” examines the upheaval of world war as Americans like Boone lived it, in the trenches and at home.

“There’s not one American experience of World War I,” said Sahr Conway-Lanz, a historian in the Library’s Manuscript Division. “There are many ways in which Americans experienced the war—what it meant to them, what they went through, how deeply it touched them.”

The Library holds the most comprehensive collection of materials on U.S. involvement in the war. Over the course of its run, “Echoes” will feature more than 600 collection items: music, diaries, correspondence, recorded sound, posters, photos, medals, scrapbooks and maps.

The Library also digitized nearly 26,000 feet of rare film for the exhibition—President Woodrow Wilson picks numbers for conscription, an animation pioneer depicts the sinking of the Lusitania.

“Nitrate stock is very fragile in addition to being volatile; thus, much of this footage has not been seen since the war itself,” said Cheryl Regan, a senior exhibition director in the Interpretive Programs Office. “These silent clips document the American experience in the First World War, on the home front and the front lines.”

Stories from Over There

The exhibition presents documents of great figures—President Wilson’s first draft of the League of Nations covenant, the diaries of American Expeditionary Forces commander Gen. John J. Pershing—and of ordinary men and women, over there and at home.

“One of the great things about this exhibit is that virtually every item tells a story of some kind,” Conway-Lanz said. “It really is amazing what the collections of the Library allow folks to learn about the war.”

The war inflicted more than 38 million military and civilian casualties—about 320,000 of them American. Theodore Roosevelt’s son, Quentin, was one. 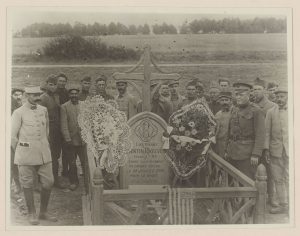 Soldiers gather by the grave of Lt. Quentin Roosevelt, killed in aerial combat in 1918.

All four of Roosevelt’s sons served in the war (and three would serve again in World War II). Quentin, the youngest, joined the Army Air Service as a pilot and was shot down over France in July 1918—whether killed or captured, Roosevelt didn’t know.

Roosevelt soon received a letter—part of the exhibition—from English author Rudyard Kipling, expressing hope that Quentin was safe. Kipling understood how Roosevelt might feel: His own son was killed in action in 1915.

“The boy has done his work honourably and cleanly and you have your right to pride and thankfulness. . . . No words are any use but we all send you our love and deep sympathy,” Kipling wrote.

Quentin, however, wasn’t safe: He’d been killed in a dogfight, and the Germans buried him where he fell.

Charles Hamilton Houston attended training camp for African-American officers, went to artillery school and shipped out to France. Houston recorded his experiences in a diary—the racial hostility he encountered in the military, the freedom of his postwar service in Paris. 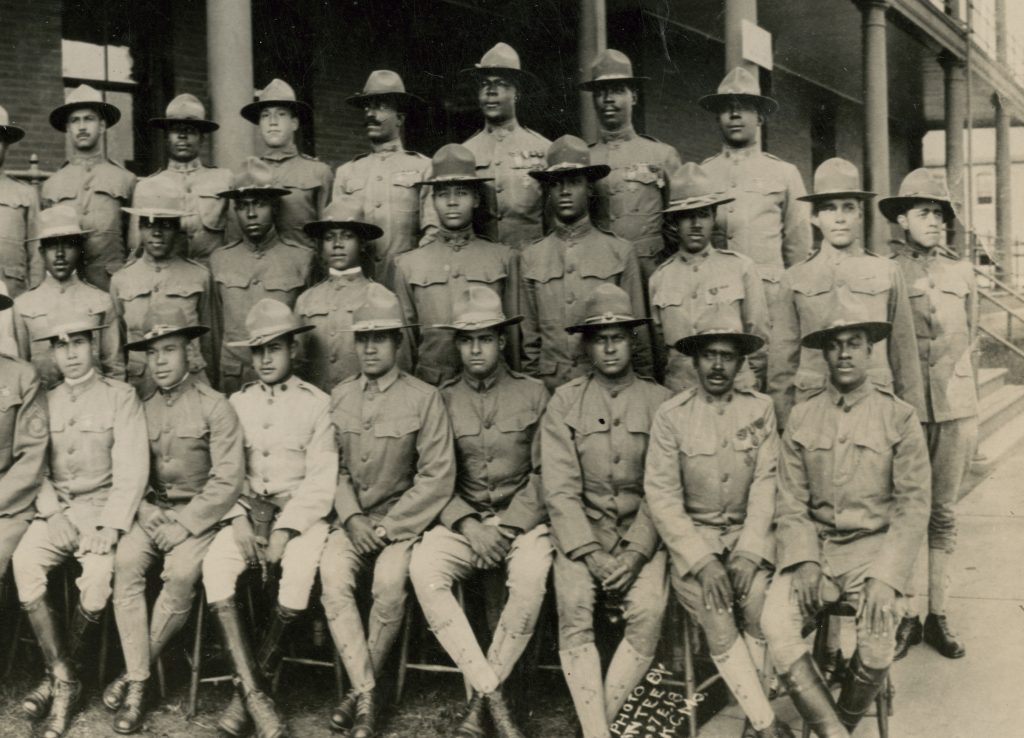 “Had a good time dancing,” Houston wrote. “French girls anxious to learn our dance; told me that all Paris is taken away with ‘jazz-band’ and our style of dancing. The girls came after the boys in taxis and beg them to go to the dance. Colored boys are all the go.”

Inspired by his military experiences, Houston attended law school, served as dean of Howard University law school, trained a cadre of civil-rights lawyers (including Thurgood Marshall), and, as the NAACP’s litigation director, argued cases before the U.S. Supreme Court— work that eventually earned him the nickname “The Man Who Killed Jim Crow.”

“He died in 1950, so he never gets to see the culmination of his efforts,” said Ryan Reft, a historian in the Manuscript Division. “But he lays this groundwork, and World War I is kind of the crucible through which he passes to come to this civil-rights awakening.”

George S. Patton earned a reputation as a brilliant commander in the Second World War—one of military history’s most complex and compelling figures.

His first battle experience, however, came in the Great War. Patton led U.S. tanks into battle at St. Mihiel, but a serious wound cut his campaign short on the first day of the war-ending Meuse-Argonne offensive. 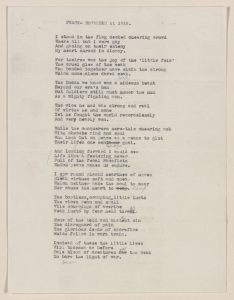 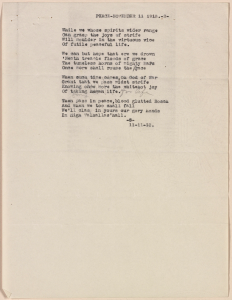 The Library holds the Patton papers—including his voluminous war poetry. Patton, fueled by ambition and a sense of his own as yet unfulfilled destiny, wasn’t thrilled when peace finally came.

On the day the armistice was signed, Patton wrote a poem called “Peace,” lamenting the end of hostilities: “I stood in the flag decked cheering crowd / Where all but I were gay / And gazing on their extecy / My heart shrank in dismay.”

Most, however, were glad the “war to end all wars” was over and to return home, to a world that never would be the same.

“The war,” Reft said, “reshaped the world politically, economically and geographically, while setting into motion processes domestically that, for good and for ill, culminated over the next three decades—particularly with America’s participation in World War II.”

The exhibition, located in the Jefferson Building’s Southwest Gallery, closes in January 2019.