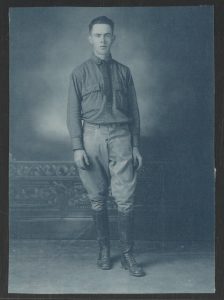 This is a guest post by Rachel Telford, archivist for the Veterans History Project. It was first published on “Folklife Today,” the blog of the American Folklife Center.

Recently, the Veterans History Project launched “Over There,” part two of our companion site to the Library of Congress exhibit “Echoes of the Great War: American Experiences of World War I.” While part one explores the United States’ entry into the war, part two delves into the experiences of American servicemen overseas during the world’s first large-scale, industrialized war.

Francis Edward Mahoney wrote to his mother regularly while he served in France. His wartime letters are full of details about his incoming mail and assurances that he is in good health but provide little insight into his experiences. However, shortly after the armistice, he writes:

I never told you about the front Ma, because I was afraid you would worry but now it is all over and safe I guess it is alright.

He goes on to describe frigid conditions during his first winter in France, service on the front lines as a truck driver and close calls with enemy artillery.

Louis W. Rosen also spared his parents the details of his service during the war, but in two lengthy letters written after the armistice, he details his experiences repairing telephone lines with the 77th Infantry Division and notes: 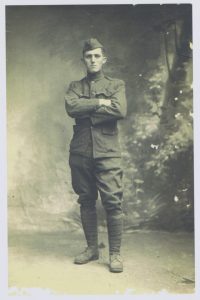 Very often would I witness a shell land in a spot where I had been only a short while before.

While Mahoney and Rosen managed to avoid injury, others were not so lucky. Leo Joseph Bailey was wounded at Belleau Wood while diving
for his dugout during an artillery attack and would spend two months recuperating in various hospitals. Interestingly, in his memoir he recalls not the pain of the injury but the joy of sleeping in a bed for the first
time in nearly a year and waking to clean linens and a hearty breakfast.

Norvel Preston Clotfelter also found himself in the hospital, though not due to injury. Like thousands of other soldiers during this period, he fell ill with the Spanish flu and, in a move that likely saved his life, was removed from the front lines and hospitalized in the final days of the war. 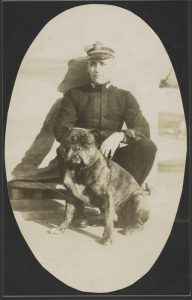 The major battles involving the United States all occurred on land, but the Navy also played a vital role. Sailors like Lucius Byron Nash, who served aboard USS Roanoke, distributed mines across the North Sea to deter German U-boats (submarines). In letters home, he describes a dirty, grueling job, which demanded 12-hour shifts spent on deck in the pouring rain.

Whether they were on land or at sea, on the front lines or in support positions at the rear, American service personnel faced dangerous conditions and made considerable sacrifices as they fought for Allied victory. View all of the collections featured in the “Over There” exhibit here.

And don’t miss the third and final installment in our World War I series, “A World Overturned,” coming in September.