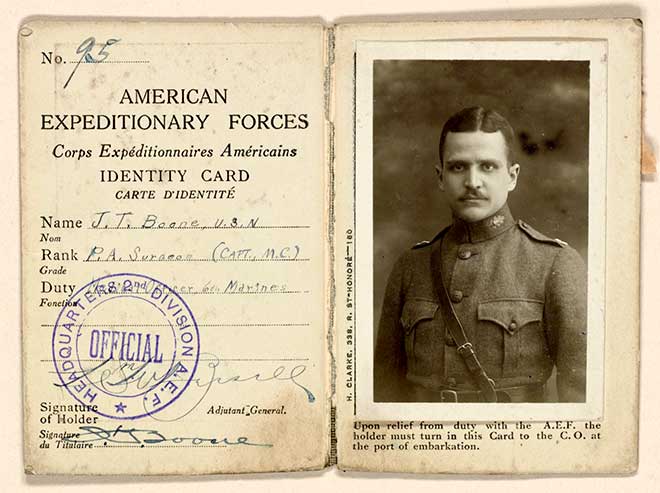 By the time he wrote those words to his wife, Joel T. Boone, a Navy doctor assigned to the Marine 4th Brigade, had just spent over three weeks suturing wounds, saving lives and providing solace to the soon-to-be-departed as one of World War I’s most famous conflicts, the Battle of Belleau Wood, raged all around him.

The experience left no small impression. “Man cannot pass through hell as I have without feeling love more deeply, more sincerely than ever before,” he wrote. “Each of us is spiritually bettered, if physically weakened by the tortures and anguish of the recent past.”

On June 6, 1918 – 100 years ago today – the Battle of Belleau Wood began. Boone, whose story is told in the Library of Congress exhibition Echoes of the Great War: American Experiences of World War I, and whose papers reside in the Manuscript Division, provides unique and terrifying insight into the struggles, triumphs and myths that epitomize Belleau Wood, a conflict that would define the U.S. Marines for the next hundred years.

Though victory at Belleau Wood required the combined forces of the U.S. Marines and Army, the former usually receives the lion’s share of attention – a fact many Army veterans have pointed out. Regardless, it remains true that until World War II, Belleau Wood was the bloodiest Marine conflict in U.S. history. More than 1,000 were wounded on the first day of fighting alone, and 222 died. In all, nearly 10,000 members of the combined Marine-Army force were injured, deceased or missing when fighting ended around June 26.

Some historians have overplayed the battle’s strategic importance. Marine historian George B. Clark argued it was the most important battle fought by U.S. troops during the war’s entirety, while Richard Rubin claimed in a 2014 New York Times article that if the U.S. had failed to take the woods, “Germany would have won the war that month.”

U.S. efforts in the woods did contribute to a halting of the German offensive in 1918, but such observations are undoubtedly tinged by well-meaning hyperbole.

More recently, historian Edward G. Lengel disputed these conclusions, criticizing U.S. battlefield decision-making and tactics and lamenting the U.S. military’s denigration of French efforts. Yet Lengel and others acknowledge the battle did inject critically important vigor and enthusiasm into the Allied cause while also elevating the place of the Marines in the popular consciousness. 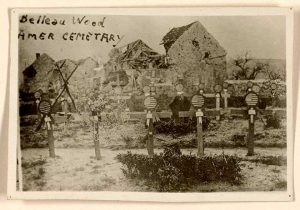 The ruins of a farmhouse dressing station occupied by Joel T. Boone and his fellow corpsmen during the Battle of Belleau Woods can be seen in the background of this photo.

The American soldiers who fought at Belleau Wood might have been tactically poor, but they made up for it with adaptability, courage and aggressiveness. Boone asserted the same: “There have been such marvelous deeds of bravery and most everyone has displayed extreme courage under the most trying circumstances. The American has shown himself to be an unsurpassed soldier.”

Boone reported witnessing U.S. assaults in which “waves of our men attack in formation across open fields [while] German machine gun, rifle and gunfire rain over them.” Men fell, got up, pushed on and fell again, only to be replaced by their fellow soldiers “passing on undaunted to take the coveted territory.”

During the heart of the fighting, Boone and his fellow corpsman set up a dressing station near the battle where the injured, maimed and dying flooded their quarters. “Officers with both legs gone in the prime of youth is one of the most horrible to see,” Boone wrote his wife, “I had [two] such cases last night. We … dress and control hemorrhage, treat for shock, and evacuate the casualties.”

Boone and his counterparts endured three separate gas attacks and artillery barrages that caused housing to shake and the ground to “pulsate.” Another assault days later “demolished” one of the farm buildings from which they labored. Yet his fellow officers, Boone noted, rarely groused or lamented their condition. “These officers coming in wounded, terribly, terribly, wounded, rarely complain. They have endured their hardships and suffering gloriously. My heart has bled by the things I have seen,” Boone confided to his wife.

It was not just soldiers who drew praise from Boone. “Not only combatants, but non-combatants have done most highly commendable work,” he noted. “My [corpsmen] mean more to me now than ever before and they have proved themselves wonderful lads. All deserve commendation and I hope that each receives it and some very material reward. The bandsmen, as stretcher bearers, did splendidly and have established a tradition for future bearers that will be hard to surpass.” 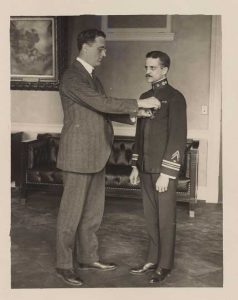 Franklin D. Roosevelt (left), who was then assistant secretary of the Navy, pins the Medal of Honor on Joel T. Boone in 1919.

Due to the constant bombardment, Boone sustained an ear injury that would require later medical attention. But he also suffered mentally. He found it difficult to write or talk. “The experiences of the recent past have had a most depressing effect upon me and I seem to be even more than usually serious.” He struggled with nightmares for days. “No wonder my mind, when uncontrolled in sleep, should be disturbed when the horrors of the past week have made a lasting impression on my mind,” he reflected. “I live my days over and over and there is but one present desire and that is to live nobly, righteously, and sacrificedly for my fellowman.”

Boone would recover. He did not receive a medal for his work at Belleau Wood. But in 1919, he was awarded the Medal of Honor in recognition of his contributions during the war. He went on to become White House physician to Presidents Herbert Hoover and Franklin D. Roosevelt during the 1920s and 1930s.

Reading Boone’s unpublished memoirs, included in his papers, reveals a man who believed he had witnessed, and played a role in, one of the great moments of U.S. military history. “Specific deeds of heroism are to be related by the fireside, if it may please God, in the years to come. My mind is full of them and someday I know that I may hold your hand and tell you of the men – every inch of men and the glorious American blood, richer, deeper red, and more glorious than ever in our history before.”