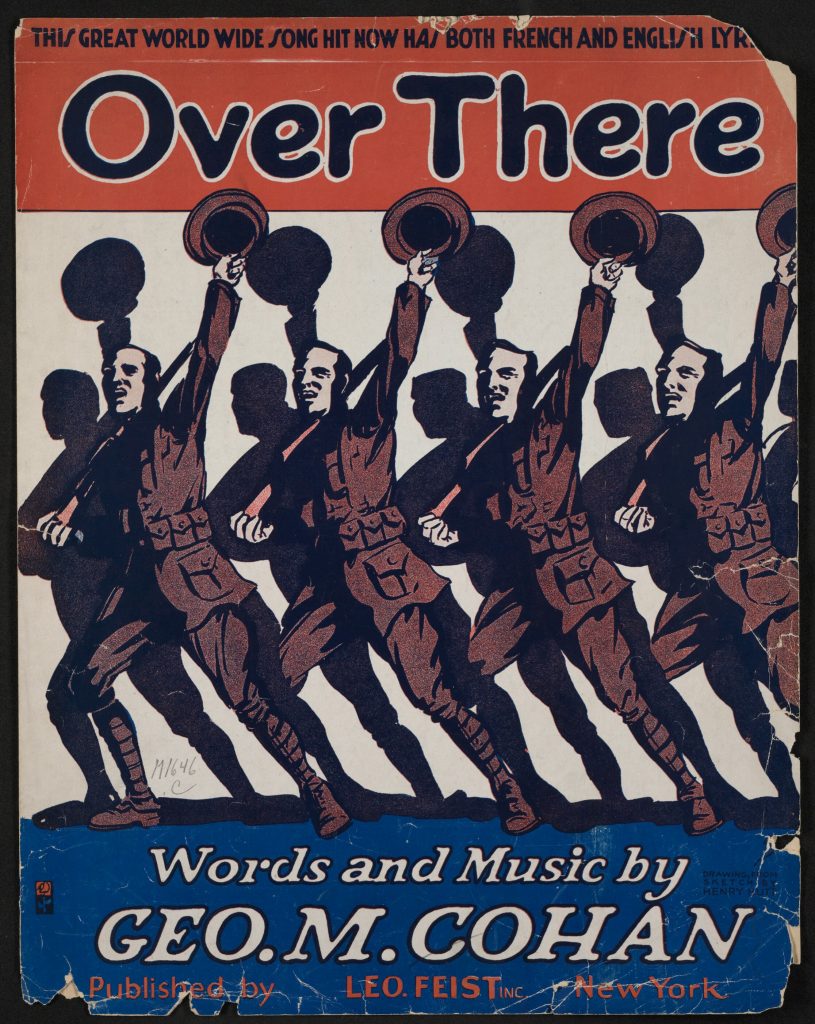 This is a guest post by Mark Hartsell, publications editor in the Office of Communications. It first appeared in “Veterans on the Homefront,” the November–December issue of LCM, the Library of Congress Magazine. The entire issue is available online.

In America, no song is more associated with the Great War than George M. Cohan’s “Over There.”

The Library preserves recordings and sheet music of thousands of tunes from World War I.

The Great War inspired thousands of songs, music that a century later still evokes a world at war, families separated, loved ones lost: “Over There,” “Pack Up Your Troubles in Your Old Kit-Bag,” “Keep the Home Fires Burning.”

Recordings of many of those songs are collected on the National Jukebox, a Library of Congress website that makes historical sound recordings from 1901 to 1925 available to the public for free. The songs of the World War I period, and the recordings of them in the Jukebox, reflect the spirit of nations going to war and the men and women caught up in the conflict.

One of them was Ernestine Schumann-Heink, a Czech-born operatic singer who moved to the United States, became an American citizen and, later, strongly supported the war effort on recordings found on the Jukebox—“Just Before the Battle, Mother,” “When the Boys Come Home,” a vocal version of “Taps.”

The site also features the Nora Bayes recording that made “Over There” a hit. Listen to it here:

Hundreds more war-related songs by other artists are also accessible: “Goodbye Broadway, Hello France!,” “Lafayette (We Hear You Calling),” “It’s a Long Way to Berlin, But We’ll Get There!,” “When You Come Back, and You Will Come Back, There’s the Whole World Waiting for You.” 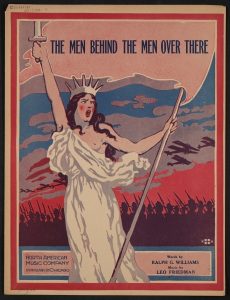 “The Men Behind the Men Over There,” by Leo Friedman and Ralph G. Williams.

When America entered the war, popular songwriting and the music-publishing industry centered in Tin Pan Alley had reached their zenith. Over the years, the Library acquired more than 14,000 examples of sheet music related to the war and eventually made them available online.

Those songs collectively reveal America at war, its confidence (“The Kaiser Will Be Wiser When the Yankees Take Berlin”), its strength (“The Yanks with the Tanks”), its acknowledgment of war’s cost (“Shrapnel Blues”) and even its humor (“Would You Rather be a Colonel with an Eagle on Your Shoulder or a Private with a Chicken on Your Knee?”).

In America, no song is more associated with the Great War than George M. Cohan’s “Over There.” The online collection features original sheet music for “Over There” and dozens of the spin-offs inspired by Cohan’s enormously popular tune: “Over Here!,” “The Boys Over There,” “The Girls Over There,” “The Men Behind the Men Over There,” “When I Send You a Picture of Berlin, You’ll Know It’s Over, ‘Over There.’ ”

The reality behind the music, of course, was a brutal conflict, waged with revolutionary weapons, that inflicted tens of millions of casualties and created untold misery.

Lt. Col. John McRae served with the Canadian Expeditionary Force at the Second Battle of Ypres in Flanders, Belgium, in 1915. Presiding over the funeral of a comrade killed in the battle, he noticed how quickly poppies grew around the graves of the fallen. 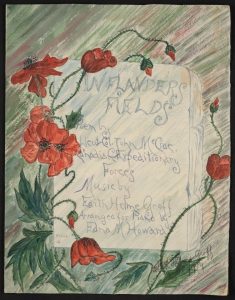 Moved, McRae wrote “In Flanders Fields,” a poem set to music by many songwriters during the war (and which later inspired the symbolic “remembrance poppies” still worn today to commemorate war dead).

The Library’s World War I sheet-music collection holds dozens of versions, a somber reminder of millions of young lives lost a century ago:

“In Flanders fields the poppies blow
Between the crosses, row on row,
That mark our place …
“We are the Dead. Short days ago
We lived, felt dawn, saw sunset glow,
Loved and were loved, and now we lie
In Flanders fields.”