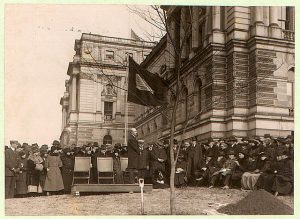 The Library’s Thomas Jefferson Building is bordered by a number of impressive trees. One of them, a Japanese elm at the southwest corner of the building, was planted on Dec. 17, 1921, in memory of four Library of Congress staff members killed while serving in World War I. According to an article published in the Jan. 1, 1921, issue of the Library Journal, the planting of the tree was supervised by Superintendent of Building and Grounds Bernard Green. The article includes this photograph of the ceremony, which can be found in the Prints and Photographs Division.

The Library’s service flag, bearing 95 stars for all Library staff members who served, is stretched out in the wind. The day looks bright, but it must also have been cold. The crowd members wear hats and thick coats, but Librarian of Congress Herbert Putnam, addressing them in the photo, has taken off his hat. Behind him, the American flag flies at half-staff on the Jefferson Building. 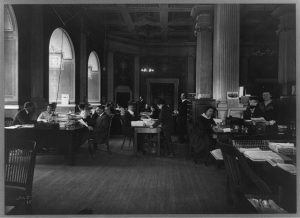 A.L.A. Library War Services Headquarters in the Library of Congress. 1918 or 1919. Prints and Photographs Division.

Chambers worked in the Smithsonian Section, Comegys and Dunkin worked in the Copyright Office and Wheeler was a member of the building maintenance force. Putnam wished to say more about their service but lamented that the “details of it are meager and unequal.” The available information was that, like many military deaths of World War I, the four men died from disease, not combat. He offered some information on their service:

Of the service – and character – of Lieutenant Comegys, his first Commanding Office, Captain Powell [who attended the ceremony], is to say something. He alone, of the four was killed in action – in the St. Mihiel drive. Dunkin also was in fierce fighting in which he showed both dash and grit. But it was not in action but in hospitals that he and Chambers came to their end – and both from pneumonia due to exposure in the trenches.

Chambers had reached the fighting zone – on the Meuse – and was within reach of the German “heavies.” But the satisfaction of a response with his own gun was denied him; for before his unit – “Washington’s Own” – took the offensive that ended in the capture of Montfaucon – on the very night before this – he was rated too ill to fight. With 25 others of his Company, he was hurried to a field hospital and later to Hospital 26 at Alleray. There, within a few days, he died. 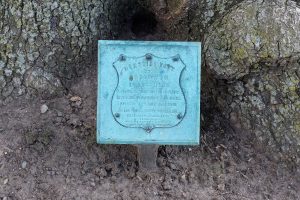 Wheeler did not have the fortune to be sent abroad. His value was found in photographic work for which, after preparation at Columbia, he was detailed to Camp Merritt. It was there he died, also of pneumonia.

Putnam finished his remarks with these lines from Rupert Brooke’s 1914 poem, “The Dead,” and from Marjorie L.C. Pickthal’s poem “When It Is Finished.”

These laid the world away; poured out the red

Sweet wine of youth; gave up the years to be

Of work and joy, and that unhoped serene,

That men call age; and those who would have been,

Their sons, they gave, their immortality.

“When It is Finished,” Marjorie L.C. Pickthal

Bid us remember in what days they gave

All that mankind may give 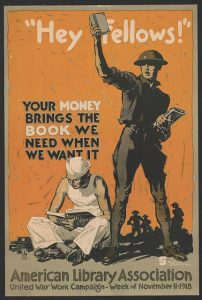 During the war, not only did men go to war, so did books. According to Wayne Wiegand, distinguished visiting scholar at the John W. Kluge Center, the American Library Association established its Library War Service in 1917 to provide books and library services to US soldiers and sailors both in training at home and serving in Europe. In fact, 12-year-old Rachel Ashley, daughter of Frederick William Ashley, who was the superintendent of the Library of Congress main reading room at the time, dropped off ALA leaflets at homes in her Washington, D.C. neighborhood inviting neighbors to donate books for the effort, wrote Wiegand in an article for American Libraries Magazine.

World War I Centennial, 2017-2018: With the most comprehensive collection of multi-format World War I holdings in the nation, the Library of Congress is a unique resource for primary source materials, education plans, public programs and on-site visitor experiences about The Great War including exhibits, symposia and book talks.