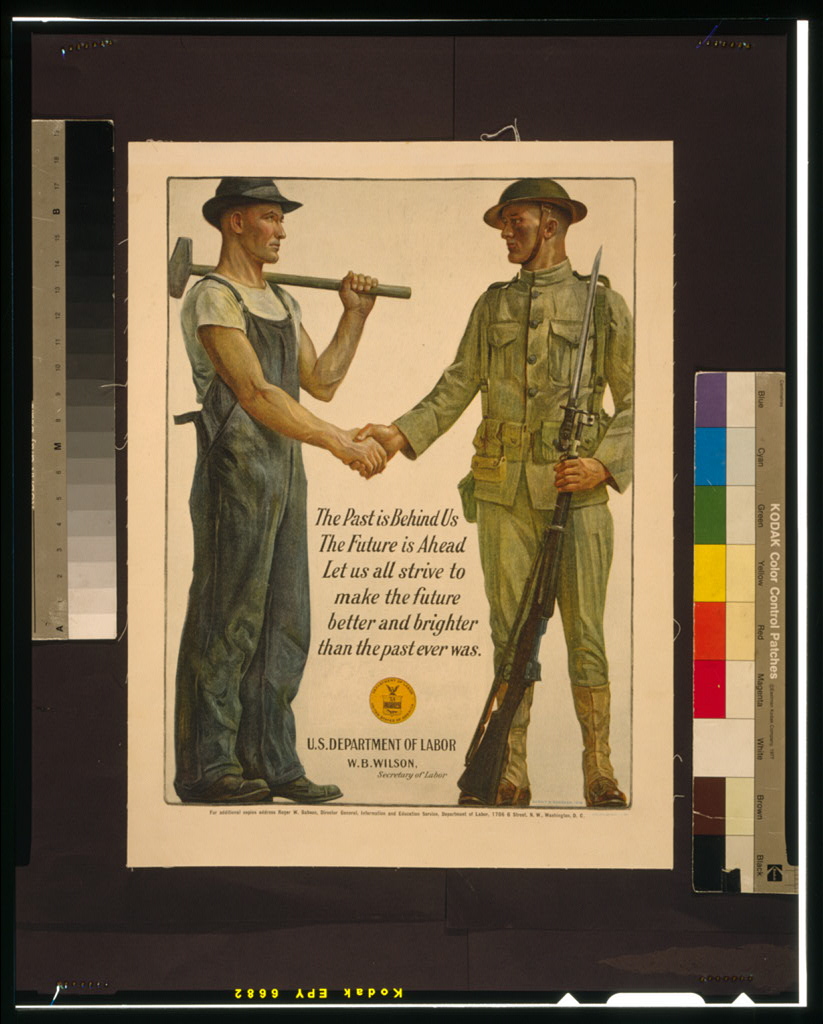 In a 1918 U.S. Department of Labor poster, a worker shakes hands with a soldier in symbolic support of the U.S. war effort.

Amid war, Labor Day in 1918 took on increased importance. Mobilization had presented unprecedented opportunities, and workers achieved remarkable advances during America’s months at war. Many reached out to President Woodrow Wilson before the 1918 holiday, hoping that he might make an appearance at their celebration: “Consider this Mr. President, and think of the moral effect upon our tens of thousands of shipyard workers who look to you for light and guidance,” wrote Oakland, Calif., labor representative William A. Spooner. Soon, however, in the afterglow of armistice and peace, labor would witness retrenchment.

The Library of Congress exhibition “Echoes of the Great War: American Experiences of World War I,” along with holdings from our Prints and Photographs Division, illuminates both the opportunities and the challenges that faced wartime laborers.

For labor, Wilson seemed an unlikely ally. As a younger politician, he had assailed the labor movement, describing it simultaneously as “economically disastrous” and “politically divisive.” When presidential ambitions and political necessity collided, however, Wilson courted labor.

In his first term, Wilson elevated the Department of Labor to a cabinet body and appointed “labor partisan” William B. Wilson as its head. Later, the president supported the passage of several labor reforms, including the Keating-Owens and Adamson Acts. In November 1917, Wilson became the first president to address the American Federation of Labor (AFL) at its annual convention. 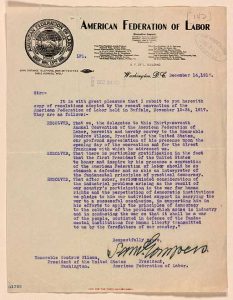 A December 14, 1917, letter from Samuel Gompers to Woodrow Wilson pledging the AFL’s support for the war.

Behind its president, Samuel Gompers, the AFL leant its support to Wilson and mobilization, even declaring labor’s “undivided support . . . so that it shall be a war of the people” in defense of the “fundamental institutions for human liberty transmitted to us by the forefathers of our country.”

The AFL expanded its membership from 2 to 3 million between 1917 and 1919. By the war’s conclusion, nearly a fifth of the workforce, excluding agriculture, belonged to a union. That is to say nothing of the benefits that nonunion labor in wartime industries enjoyed due to the achievements of their unionist counterparts. Yet the AFL did not represent all workers and could not fully guarantee the actions of all organized labor.

War rarely creates new conditions or movements in American society, but it does accelerate processes already in motion. This proved true of the nation’s labor movement, which had been battling big business since the late 1800s. From 1916 to 1922, between 1.5 and 4 million workers struck annually. The war failed to end such conflicts—instead, it raised the stakes.

More radical unions like the Industrial Workers of the World (IWW) struggled as the U.S. government sought to place its foot on the IWW’s proverbial neck. In September 1917, the government raided IWW offices and placed over 100 of the union’s officers on trial in Chicago in 1918. Ironically, Gompers and other conservative unionists welcomed government intervention; it allowed Gompers to purge the AFL’s more radical members, marginalize rival unions and secure his own power. 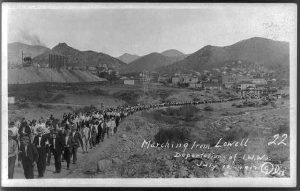 A July 12, 1917, photograph of hundreds of Wobblies being deported into the desert from Lowell, Ariz., now part of Bisbee.

Unions faced nongovernmental opposition as well: vigilantes targeted Wobblies, as IWW members were known, with violence. In 1917 in Bisbee, Ariz., local business leaders and police forced hundreds of Wobblies onto trains and deported them into the middle of the desert without food or water.

With nearly 440 strikes in the first month after the U.S. entered the war, Wilson agreed to the creation of numerous wartime labor agencies. The President’s Mediation Commission was created in September 1917 and dominated by future Supreme Court Justice and labor sympathizer Felix Frankfurter. The National War Labor Board, headed by former President William Taft and labor militant Frank P. Walsh, was established in April 1918 to intervene in labor disputes.

Through these two agencies and others, labor made great advances—though they were not shared equally across industries. Achievements included de facto recognition of unions, eight-hour work days, better wages, improved work conditions and collective bargaining. Critically, however, Wilson and Congress never institutionalized these gains. Or as historian Melvyn Dubofsky argued, “Wilsonians stocked the barest of legislative cupboards.” Moreover, the government’s wartime agencies lacked the power to actually enforce decisions; outcomes hinged on their ability to manipulate nationalism and wartime patriotism to cajole industry and labor to cooperate. 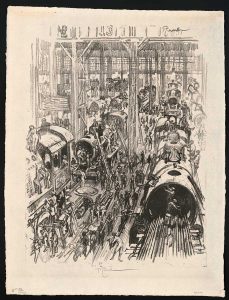 A 1917 lithograph by Joseph Pennell depicts wartime work. He created it on behalf of a federal committee charged with pictorial publicity about the war effort.

Consequently, when armistice arrived on November 11, 1918, many of the gains afforded labor quickly evaporated. With the pressure of war removed, business leaders, who had always chaffed at government intervention, rolled back reforms. Under duress from an economy afflicted by inflation, workers soon went on strike; 1919 witnessed 3,000 strikes involving 4 million laborers.

Despite these admitted setbacks, World War I enabled labor to weaken what Frankfurter and others called “industrial autocracy.” It might not have enacted the “industrial democracy” that had been on the lips of workers during the war, but business now had to acknowledge labor, even if with half-hearted company unions.

Later, Franklin D. Roosevelt, who was assistant secretary of the Navy during World War I, drew upon his wartime experience to sign labor reforms into law through New Deal legislation. World War II then normalized and undergirded the labor movement, putting postwar retrenchment out of reach.